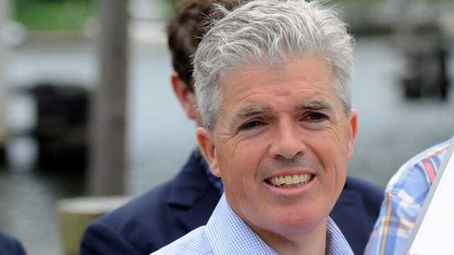 Just as the lawsuit between the Long Island Power Authority (LIPA) and the Town of Huntington heads into final arguments in court, Suffolk County Executive Steve Bellone finally comes out of the shadows. Well, sort of. He has announced that his Deputy Executive, Jon Kaiman, will urge LIPA and the Town to come together to try and negotiate a settlement. If that sounds like a familiar approach to the problem, it should … it’s what Suffolk County Comptroller, John Kennedy, Huntington Supervisor Chad Lupinacci, New York State Senators John Flanagan and Jim Gaughran and several other elected officials have been doing for months and months. Mr. Kennedy, Candidate for Suffolk County Executive, said Mr. Bellone is jumping in at the very last minute to simply try to score political points on this situation, while having his second-in-command handle negotiations. However, while everyone else was fully engaged in this issue, Mr. Bellone was nowhere to be found.

At the end of May 2019, Mr. Kennedy penned a letter to Governor Andrew Cuomo, urging the Governor to get involved in this issue by encouraging the LIPA officials to come to the table for negotiations with Huntington Town officials. What did Steve Bellone do? Nothing.

On June 11, Mr. Kennedy joined elected officials from the Town of Huntington, members of the Northport-East Northport School District and hundreds of local residents, who all gathered in the pouring rain, to call on LIPA to work in good faith with the town. Mr. Bellone was nowhere to be seen.

On June 22, John Kennedy and Senator Gaughran joined with dozens of residents, rallying to publicly urge LIPA to work with Huntington Town to reach a fair and equitable settlement to prevent what could very well be a fiscal disaster for Suffolk County. Once again, absolutely no sign of Steve Bellone.

“Steve Bellone has done absolutely nothing,” said Dean Murray, Mr. Kennedy’s Campaign Manager. “He sat on the sidelines and now wants to send in his guy to pretend to save the day. Suffolk County’s fiscal future is in jeopardy and Steve Bellone is playing politics.”

A recent Newsday “Talking Point” article quoted Mr. Kaiman as saying, “We’ve been watching what’s been going on and we have a sense it’s coming to a head.” In response, Mr. Murray said, “Real leaders step up, take action and take on the tough issues, not sit on the sidelines and watch. This is nothing more than grandstanding at its worst. When the people of Suffolk County needed him most, Steve Bellone and his administration were nowhere to be found.”

“While Steve Bellone has been cowering in the corner, hoping the situation would resolve itself, John Kennedy has been a vocal leader on this issue,” Mr. Murray said. “He was the one person who pointed out exactly how serious this problem is for all of Suffolk County, explaining that a loss in court could result in a back payment to LIPA in the amount of hundreds of millions of dollars.”

For those keeping score, this is not John Kennedy’s first clash with LIPA, as they are currently embroiled in a legal battle over LIPA’s failure to pay property taxes. John Kennedy continues to prove that when it comes to protecting the taxpayers, there is no one who will fight harder than him.

* Copy of Mr. Kennedy’s letter to Governor Cuomo is available upon request.