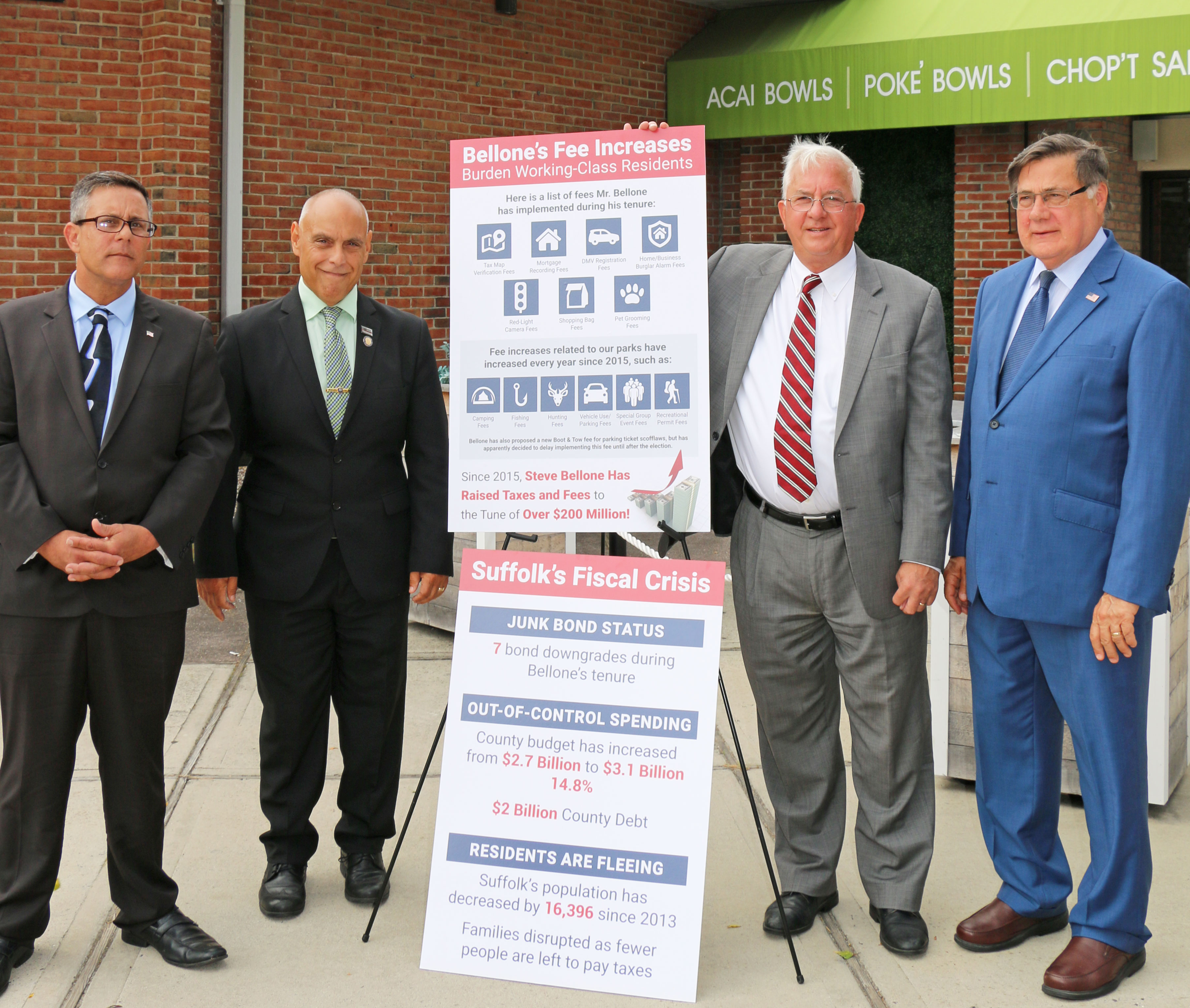 Ronkonkoma, NY — On September 12, John M. Kennedy, Candidate, Suffolk County Executive, was joined by local elected officials and residents at a press conference at Armed Forces Plaza in Patchogue, announcing the continuation of his “Fiscal Reality Tour” as part of his campaign to #SaveSuffolk.

Mr. Kennedy also contrasted the Town of Brookhaven’s financial performance with that of Suffolk County’s. Moody’s Investor Services recently upgraded the town’s credit rating to AAA, its highest rating; meanwhile, Suffolk’s bond rating has been rated Baa2 (a rating considered “junk”). Moody’s credited Brookhaven with its “continued strong financial management,” while Suffolk County Executive Steve Bellone has engaged in out-of-control spending for the past seven years, resulting in seven bond downgrades. “We are issuing junk bonds, and, each payroll period, we don’t know if we’ll be able to pay our bills,” Mr. Kennedy said. “We’ve had to declare a fiscal emergency seven times. It’s outrageous and it has to end.”

As an example of Brookhaven’s responsible fiscal management, the town has set aside a fund for maintaining the town’s landfill and has a plan in place to minimize lost revenues. Mr. Bellone, on the other hand, has raided the water fund to the tune of millions of dollars.

“I want to congratulate Supervisor Romaine for achieving the highest bond rating possible for any municipality,” Mr. Kennedy said. “Unlike Mr. Bellone — who has spent taxpayer money wildly, and had to raise taxes, implement fees and raid the water fund to plug budget deficits — Mr. Romaine has held the line on taxes and spending, making Brookhaven a more affordable place to live for its residents. If Suffolk County operated like this, it would not have seen seven bond downgrades, seven fiscal emergencies and over 16,000 people fleeing the county.”

Also exacerbating Suffolk’s fiscal crisis is the reduction in population. The county’s overall population has shrunk by 16,396 in the past seven years, leaving fewer taxpayers to bear a higher tax burden. Favorable Industrial Development Agency (IDA) benefits have further reduced the county’s tax base.

“When I decided to run for New York State Assembly, it was to try to help the younger generations, like my daughter, from moving out of state,” said Joe DeStefano, New York State Assemblyman. “Due to the current high costs of living on Long Island, especially Suffolk County, my daughter and her family were forced to move out of New York to seek a more affordable life. If nothing changes, at the rate we are going here in Suffolk County, I predict more and more families will be broken up like mine has.”